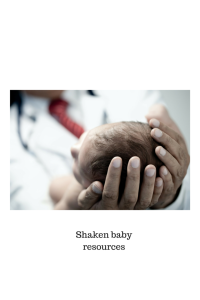 Inspired by the The Syndrome screening I thought I would collect up a few useful resources on the topic of shaken baby, both legal and medical.

For the moment I will concentrate on articles which are freely available but I will later produce a bibliography on articles which can be accessed through subscription websites such as the BMJ. Most of the articles, books and websites referred to tend in the direction of arguing against the existence of the syndrome or emphasising the need to examine the possibility of a differential diagnosis. I have not been able to find many freely available publications putting the opposite case (though there is one from a US former prosecutor). I suspect this is because of the state of the current medical thinking on what constitutes sufficient evidence to diagnose deliberately inflicted shaking injuries (the triad alone usually will not do at least in a criminal context) and because more of the classic arguments are in articles on medical sites for which subscriptions are needed. My own experience is that there are far few family cases involving allegations of shaking alone – most of them involve head injury together with fractures which cannot generally be explained by any medical condition, as far as I am aware although of course they might be explained by accident & condition or non-accident & condition.

In it he refers to a 2009 paper by Deborah Tuerkheimer – The Next Innocent Project: Shaken Baby Syndrome – the abstract is here and from that page you can download the whole paper. Her paper focusses on the way in which medical evidence is used in the criminal courts in the US but it highlights new research and casts doubts on the validity of convictions based on the triad.

Her 2015 book – Flawed Convictions: “Shaken Baby Syndrome” and the Inertia of Justice – is available to order from Amazon and downloadable as a kindle book.

Patrick Barnes from Stanford University who features heavily in the Syndrome is co-author (with Waney Squier amongst others) of a paper Shaken Baby Syndrome, Abusive Head Trauma, and Actual Innocence: Getting It Right (2012)– you can download the abstract and the whole paper from the Social Science Network – if you search the site you will find a number of relevant articles.

For a critical history of the development of theories about Shaken Baby see the article by Luttner (2014), and a whole series of other articles (to which many of the contributors to the Syndrome film have contributed) can be downloaded from the Special Edition on the subject published by Argument & Critique

Luttner has a whole website OnSBS packed with interesting articles and commentaries and extracts from her book.

A critical response to it by Robert Reece is here on Researchgate.net

And Geddes response to Reece is here

You can access further published articles in the BMJ including more by Geddes and dissenting views by signing up for a free 14 day trial.

For arguments on the other side of the coin and which critique the evidence said to undermine shaken baby there is a downloadable pdf publication here from the National Center for the Prosecution of Child Abuse – Overcoming Defense Expert Testimony in Abusive Head Trauma Cases by former US Prosecutor, Dermot Garrett.

The Eye Examination in the Evaluation of Child Abuse (2010, reaffirmed with a correction in 2016)

Christina is also-author of two books: Shaken Baby Syndrome of Vaccine-Induced Encephalitis – Are Parents Being Falsely Accused (with Harold Buttram MD (2011) and Vaccination Policy and the UK Government: The Untold Truth (with Lucija Tomljenovic PHD) (2015) which you can order through amazon – she puts the links on her website. I will review these books in more detail later. She has also posted some interesting articles on the site dealing with differential diagnoses. There is also a downloadable information pack (last revision October 2014) which summarises and gives links to a lot of the literature on other diagnoses which can cause symptoms similar to shaking injuries.

Please contact me or comment if there are other resources you know about or have found helpful.