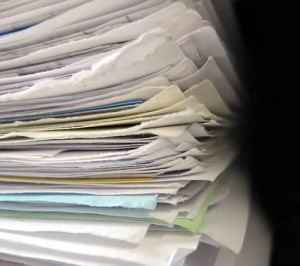 I came across a curious issue the other day. A solicitor representing the other side informed a litigant in person that under the rules, because he was unrepresented (he was by me, but by Direct Access), the solicitor was obliged to produce the bundle for the case (about contact).

Responsibility for the preparation of the bundle
3.1

A bundle for the use of the court at the hearing shall be provided by the party in the position of applicant at the hearing (or, if there are cross-applications, by the party whose application was first in time) or, if that person is a litigant in person, by the first listed respondent who is not a litigant in person. Where all the parties are litigants in person none of them shall, unless the court otherwise directs, be obliged to provide a bundle, but any bundle which they choose to lodge must be prepared and lodged so as to comply with this practice direction.

The parties had in fact practically agreed the contents of the bundle and my client had prepared an index.

It was what the solicitor went on to say which astounded me: that he would charge £1000 + VAT to prepare the bundle and expected my client to pay half of that. The bundle consisted of 150 pages. My client declined to make such a payment and the issue was not mentioned again. Am I alone at being astonished by this chutzpah and the exorbitant rate proposed? I can understand that there may be cases where putting the bundle together is a complicated business though this was not one of them. I had rather assumed that this task would not be carried out by the principal solicitor but would fall under the heading of admin with the solicitor merely supervising.

The rules, of course, helpfully say nothing about costs in relation to bundles. I would say that the buck is passed by the court and the costs must be absorbed by the represented party since the rules do not say otherwise and the usual costs order (ie no costs) should apply in a case about children.