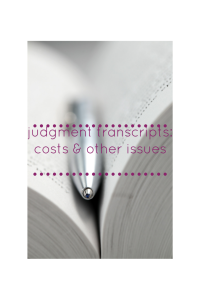 I am grateful to Nicola Jones-King of McMillan Williams & Jerry Bull of Atkins Hope who have provided the following thoughts on legal aid paying for judgment transcripts.

The Legal Aid Agency’s position is that it will only cover a shared cost of transcript where it is needed to progress the case, and/or the reason etc is set out clearly in the direction. It appears at para 6.23 of the April 2015 Expert guidance.

cost. This may be where the client requires it for a possible appeal, or where the judgment and any findings are to be provided to an expert to consider in the preparation of any report or there has been a finding of fact hearing and the judgement is required as evidence later in the case.

6.24.  Where fees are incurred after the conclusion of the proceedings in other circumstances this would need to be justified as it may not be considered a reasonable expense. A copy of the court order requesting the transcription should be provided as well as reasons why it is necessary

6.25.  There are no codified rates for transcription fees and therefore any assessment will be based on

1) Whether it was reasonable to incur the costs, based on the specific circumstances of each case and;

2) If the costs are reasonable and proportionate.

Ultimately there is no definitive answer in the guidance from LAA in that they do not explicitly rule out paying for a transcript of a final judgment but when you read the guidance at Para 6 of the Experts’ Guidance it gives two examples of when a transcript of judgement may be paid for: final judgement when appealing or prep of a report following a fact finding.

Effectively this means that these are the only two occasions when you can be confident that the LAA will cover the costs of a transcript. The fact that it may help with another child who is due shortly or that the case may come back to court may help the local authority but is unlikely to be thought to progress the current case of your client.

It therefore is fairly risky to agree to share the funding of any final order transcripts (& Counsel should be particularly careful & obtain specific instructions). If the judge still orders the publicly funded parties to contribute you should make it clear to the local authority that you will seek prior authority and if it is not forthcoming you will not pay whatever the order may say.

Also bear in mind there are no codified rates for transcribing judgements so it is probably necessary to seek prior authority anyway.

I have just been involved in a case where a court has decided that a mother’s current children  should live with relatives following a fact finding and welfare hearing.  Mother is pregnant and the baby is due later this year.  There is a clear possibility that the proceedings will be issued in relation to the unborn which will involve 3 of the publicly funded parties in the current case & the local authority and where the court’s judgment will be extremely important.  The LA has been ordered to obtain a transcript and pay for it – the Judge being very aware of the difficulties for the publicly funded parties.  There are a number of people and agencies with an interest in the judgment including the CPS & the police because there are parallel criminal proceedings (and the police now routinely charge for any disclosure they are asked for).  In due course the children may wish to know what happened.  In many cases it may be important for the carers or prospective carers to know what the court said, as well as employees of the LA, the IRO etc.  Not to mention the parents themselves who often cannot take in the judgment at the time it is delivered.  I can understand the LAA’s arguments – why should they get saddled with the additional burden of funding transcripts – but equally why should the local authority?  Perhaps one way forward would be to have central funding for transcripts and a policy that they should be routinely obtained?

In my case there will be a transcript but the parties considered that it should not be published.  The case concerns a particular ethnic community and there are fears of repercussions within it if the judgment is publicised.  The facts of the case would also make it particularly vulnerable to jigsaw identification – which, of course, will all be academic if the criminal trial goes ahead with the likely attendant publicity / publication.

costsjudgmentsopen justice
About the author